There is a narrative people tell each other about Jackson. It is fearful. It is hopeless. It passes from one person to another to comfort or confirm decisions. It gently poisons the resources enough to distract from a truth about our capital city—we are all created in God’s image. We are all worth fighting for. We are all loved.

A close friend told me the story of a ship lost at sea, its water supplies run dry. After many days another ship appeared on the horizon. Signals were sent repeatedly, asking for fresh water. Again and again, the new ship responded, “Cast down your bucket where you are.” Upon lowering and raising their bucket, the lost ship discovered fresh water. Though originally from Herman Melville, when I researched the story I discovered that Booker T. Washington had evoked it in his Atlanta Compromise speech, saying:

“Cast down your bucket where you are. Cast it down, making friends in every [...] way of the people of all races, by whom you are surrounded.”

It has been fifty-four years since the Freedom Riders arrived in Mississippi; thirty-eight years since schools were integrated; twenty-four years since Bryon De La Beckwith was held accountable for the assassination of Medgar Evars in 1963; thirteen years since Edgar Ray Killen was convicted of orchestrating the murders of James Chaney, Andrew Goodman, and Michael Schwerner in June of 1964; ten years since James Ford Seale was incarcerated for the lynchings of Henry Dee and Charles Moore in May of 1964.

Yes, there has been growth. There has been change. It is naive, though, to think that there is not work left to do. This work requires humility and investing in lives of people across the street and across the tracks. This work requires uncomfortable conversations that involve asking questions and listening to the answers. It is work that is slow and sometimes stilted but good and necessary.

As a photographer, I am compelled to meet and document these change seekers. The slow, delicate nature of large format film photography speaks to the gradual change that is taking place in the city. Using this format allows me to spend more time with my subjects. I am also working with color film, because Jackson is a richly colorful city.

I acknowledge that I do not have the answers. I acknowledge that I am white. And female. And middle class. Yet, I can no longer ignore the desire to ask questions, to search out answers, and to encourage all Mississippians to take pride in their capitol city by investing in Jackson’s communities and businesses and by supporting those who work for this change.

This is a call for us to cast down our bucket. 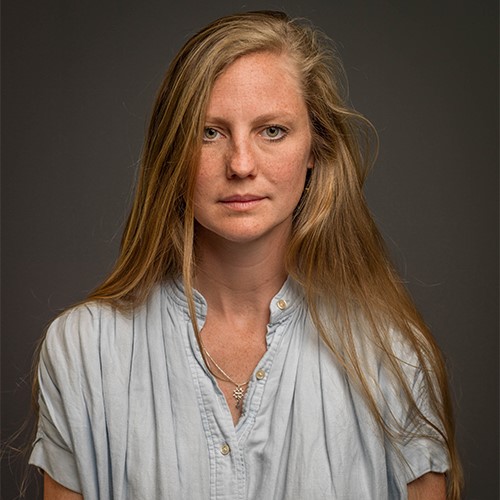 Ashleigh Coleman was born in the mountains of Virginia. She received her BA in Art History and English from the University of South Carolina. Since 2010, Ashleigh has lived in rural Mississippi where her work explores the complexities of family life, her relationship to the landscape, and what it means to have a southern identity.