You’re not from the Delta, if you know nothing of the tamales.  ~ Larry Lee, tamale vendor

For generations, the Mississippi Delta’s tamale culture was localized, and people outside of the state had no idea that a century-old culinary anomaly was thriving in a place that, one would think, shouldn’t know the first thing about this ancient Latin American foodway. But in the Delta, tamales have been around as long as anyone can remember. Even in 2005, when I set out to collect the fieldwork for the Mississippi Delta Hot Tamale Trail, an online archive of oral histories and the go-to resource for historical context on the subject, and I asked vendors how or when they think tamales arrived in Mississippi, their answer was usually the same: They’ve always been here.   1   2

And they’ve been a well-kept secret, until now.

Ten years after Larry Lee made his exclamation, Delta tamales have arrived. These unique bundles of meat and masa have found the spotlight, due in no small part to a new spin on an old event held annually in Greenville, Mississippi.  3

Frank Carlton passed away in 2009, but his vision lived on.

Back in 1990, a lawyer in Greenville had an idea: promote the Delta and its tamale culture by hosting a cooking competition. Frank Carlton was the mastermind behind the first-of-its-kind World Championship Hot Tamale Contest, held annually in Greenville and attracting home cooks and retail vendors, mostly from around town. For fifteen years, his contest supported tamale makers with cash prizes, inspired some healthy competition, and celebrated all things Delta and tamale. The last World Championship Hot Tamale Contest was held in 2005. Carlton was proud of what he set in motion, but the event never quite blossomed into the economic boost for his hometown that he had imagined. That, and he was simply too tired to keep it going. Frank Carlton passed away in 2009, but his vision lived on. 4

Even with all of this growth and recognition, the Delta Hot Tamale Festival is still a small-town to-do.

Valerie Lee, Anne Martin, and Betty Lynn Cameron were inspired to organize not just a cooking contest, but an entire festival devoted Delta tamales. In the spring of 2012, with their enthusiasm generating a newfound momentum, then-Mayor Chuck Jordan proclaimed Greenville as The Hot Tamale Capital of the World, and the first annual Delta Hot Tamale Festival was held later that fall. The one-day event included a parade with a festival king and queen, live music, an eating contest, the crowning of a Miss Hot Tamale, and what they dubbed “The Frank Carlton Hot Tamale Cooking Contest” in honor of their departed neighbor and tamale patron.

Have Deltans finally come to recognize the origins of their particular take on tamales, albeit in kitschy, dollar-store fashion?

In just a few years, the Delta Hot Tamale Festival has grown into a three-day event.  Writer and Greenville native Julia Reed threw her support behind the festival by adding the Literary/Culinary Mash-Up to kick off the weekend and recruits the support of notable chefs from around the country to participate in a gourmet version of the tamale cooking contest. The event has been featured in Garden & Gun, The New Yorker, and Smithsonian Magazine. Tamale makers come from neighboring states to show off their wares. But even with all of this growth and recognition, the Delta Hot Tamale Festival is still a small-town to-do. Local Blues musicians perform, you might spot a craft vendor advertising funerary arrangements, concession stands are filled with jars of Kool-Aid pickles, and political candidates ask passersby for their support in upcoming elections.

Curiously, there are now sombreros and piñatas decorating vendor booths. Have Deltans finally come to recognize the origins of their particular take on tamales, albeit in kitschy, dollar-store fashion? When I asked the sombrero-clad Raymond Scott Sr. of Scott’s Hot Tamales about this new trend, he said simply, “You got to give the people what they want.”

At this growing festival, what local vendors want is to be noticed, to stand out from the crowd. Because in the Delta, they know tamales.

You got to give the people what they want. 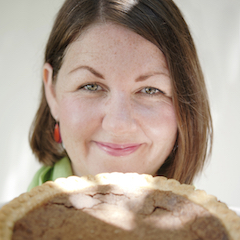 Amy C. Evans is the Custom Editor at Mississippi Folklife. She is also an artist, writer, teacher, and documentarian based in Houston, Texas. Amy built the oral history program at the Southern Foodways Alliance at the University of Mississippi and was the chief architect of the award-winning [url=”https://www.southernfoodways.org/oral-history/hot-tamale-trail/” target=”_blank”]Mississippi Delta Hot Tamale Trail[/url], which was published online in 2005. In 2011, marker #138 on the Mississippi Blues Trail was unveiled in front of Joe’s Hot Tamale Place in Rosedale, MS: “Hot Tamales and The Blues.” Read more about Amy under the Editors tab, and follow her @artandpie.