In this personal essay, Oxford guitarist Wendy Garrison reflects on her apprenticeship studying blues slide guitar under North Mississippi Hill Country's Bill "Howl-N-Madd" Perry. Her writing considers the cultural and racial dynamics that occur between black and white blues musicians, their performances, and their audiences. Through her apprenticeship with Bill, she finds her own way to "carry on the tradition in an untraditional way." This essay is presented as a preview of the upcoming Folk Arts Apprenticeship exhibition detailing the work of participating 2014 apprenticeship pairs. The opening reception, with a performance from Bill and Wendy, will take place at the Missisisppi Arts Commission's Gallery in Jackson, November 18th, 2014, from 2-4 pm.

"The panel does not recommend the artist for..."

"The applicant needs to develop the melodic sensibility of slide guitar playing."

"The panel asks the applicant to consider an apprenticeship with an experienced slide guitar player such as Bill "Howl-N-Madd" Perry in order to explore the melodics of this technique."

Like some other lucky things, the resulting apprenticeship was a deeper and richer experience than what I had gone after in the first place.

It was discouraging and disappointing. However, the relationship with Bill, my mentor for a Folk Arts Apprenticeship from the Mississippi Arts Commission grew out of an opportunity that first appeared as a result of a rejection of my work by an anonymous panel of experts in July 2012. Like some other lucky things, the resulting apprenticeship was a deeper and richer experience than what I had gone after in the first place.

“No guts, no glory,” I told myself as I took up the suggestion of the panel. The old, reliable van pulled into the Oxford Kroger parking lot where we had agreed to meet for the ride to an Indianola gig one October day in 2012.  There, in the back seat was the bluesman, at ease, and looking the part in a leather jacket and hat despite the heat, wearing sunglasses, surrounded by loose guitars and other casually packed equipment. Two diamonds sparkled in his ear. His daughter Shy, keyboard player and songwriter, glamorously sat at the wheel, while "Jookie" Massey, another relative, rode in the front passenger seat. As we loaded my guitar and amp into the van, Shy commented that she loved the sequin pants I was wearing. I said, "Well you can't wear just anything to Club Ebony." Bill replied, "Oh yes you can." He didn't really like my get-up, though was too polite to mention it outright. I squeezed in the back seat next to Howl-N-Madd, went to buckle up and the seatbelt came off in my hand as we rolled out of the parking lot. That was the beginning of the beginning of my apprenticeship with Mr. Perry.

Bill grew up poor, picked cotton, had a difficult childhood with his bootlegger father, and later moved to Chicago with the northern migration.

Over the year of the apprenticeship, which was awarded in July 2013, the Perry family shared many examples of what they personally were up against as they grew up black in Mississippi in the 1950 and 60s. I was both at their home and on the road with them for many hours during the apprenticeship. Bill grew up poor, picked cotton, had a difficult childhood with his bootlegger father, and later moved to Chicago with the northern migration. He shared with me instances of what it was like to play in a black gospel band traveling through the segregated South of the 1960s. In a striking cultural shift, I was all the more shocked and disoriented the first time Bill told me that he feels black folks are typically less interested in his music. He said emphatically that, today, he finds himself playing almost exclusively for white audiences.

In looking over videos from our apprenticeship, I noticed one clip where we are playing for an exclusively African-American audience, and Bill begins the set by joking with the crowd, "I bet any one of you $100 that you have no idea who I am." This venue, The Lewis Center or Sand Rock Inn, in rural Abbeville is owned by an African-American family, and is only minutes from his own home, yet he had never been there before. It did seem to me, though, that he and the band were very well received.

Blues, I came to realize more clearly during the apprenticeship, is a musical genre but also a marketing technique. For the most part, white blues promoters "discover" and market black musicians to other white folks. It can be a mutually beneficial relationship for the musicians and the audiences alike. At the same time, "blues," though a fitting description of my musical style, was a genre I never fully fit into because of my experience and identity as a white woman.

Thanks to my time studying under Howl-N-Madd, I now feel comfortable with my place in Mississippi music. I am simply a slide guitar player who was introduced to it in Mississippi 28 years ago and has been influenced by Mississippi and its players and listeners ever since. I am not trying to recreate any particular blues songs or maintain a blues persona. For one thing I am not a singer, so all the blues has to come from the guitar itself. I use the techniques and feeling in whatever song I am playing to try to create the perfect sound for that song. During the apprenticeship I learned at least a dozen of Bill's songs by ear, working on some melodic techniques. I learned much from my mentor's encouragement, "I LOVE what you are doing," and his suggestions, "You could play it down here [on the guitar neck]." Beyond technique, what I took in through playing with the blues band at gigs, learning the world through the eyes of the Perrys, was quite a lesson.

I regularly play in my 140 year old country church in Pine Flat where the all-white congregation loves the sound.

I am confident that I can carry on the tradition in an untraditional way. Bluesy slide guitar is very much alive and still being played all the time in Mississippi. Slide guitar methods are still being passed along from person to person, though perhaps not via the person who best fits the old blues expectation. I am extremely fortunate to have been afforded the opportunity to work with Bill "Howl-N-Madd" Perry. How I am going to pass it along is by doing it. I regularly play in my 140 year old country church in Pine Flat where the all-white congregation loves the sound. I also play in bands and solo around Oxford, and with dramatic performances. Because lots of people, young and old, black and white, male and female have asked me to teach them, what I especially need to do next is to find a way of teaching and encouraging those people as Bill has encouraged me. 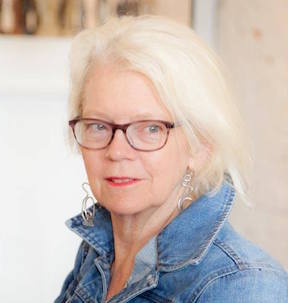 Wendy Garrison is a musician based in Oxford, Mississippi. In 2014, she studied under Master blues slide guitarist Bill “Howl-N-Madd” Perry, as part of a Folk Arts Apprenticeship grant from the Mississippi Arts Commission. She teaches in the Biology Department at the University of Mississippi.