You won’t see much in the way of waves along the Mississippi Gulf Coast. In fact, the only place you can really catch one is off the barrier islands. But you will be hard pressed to find someone to take you the fifteen-mile boat ride out there in the kind of weather that brings waves. As a result, most Mississippi surfers turn to Dauphin Island, off the coast of Alabama, which is about an hour drive from my home in Ocean Springs. Wherever we have to go to catch a wave, Mississippi surfers get stoked when the tide calls.

Wherever we have to go to catch a wave, Mississippi surfers get stoked when the tide calls.

It’s the early spring along the coast and on this day, the weather is volatile. There is a front coming to cool down the warming air. Up north, they are predicting snow and ice. Through most of the central and southern parts of the country, it’s rain, maybe some severe thunderstorms.

Among my friends on the Mississippi Gulf Coast something else in in the air. Phones ping with text messages. Weather cams are being surveyed. The app that watches buoy reports and weather patterns, Magic Seaweed, is being monitored. Suspense is building. Is this storm going to bring a swell?  Meaning, can we go surfing?

“The days leading up to a swell tend to induce an emotional state of limbo. Within just a few hours, the forecast can take a turn for worse or the better,” says Cameron Troutman, who has been surfing for about five years. “The day before the swell is always full of emotions but, ultimately, you just have to wake up early on the day of the swell and see what has arrived!”

The wind builds up waves, pushing them to the shore, and then turns to push them tall and clean: ride-able.

Most of the time, especially in the summer, the Gulf of Mexico is pretty calm. But every once in awhile, the weather is just right. The wind builds up waves, pushing them to the shore, and then turns to push them tall and clean: ride-able. When this happens, the flurry of texts and phone calls to friends reaches a fever pitch. “You've really got to schedule work around it,” says Charlie Batten, who has been surfing since he was fifteen but didn’t get serious until he was twenty-four, when he became his own boss and could drop everything to chase a wave.

We load up the boards and hit the road. The ride continues with more anxious and excited phone calls. When we make it to the Dauphin Island, a bit of scouting is needed.  It is time to check the breaks—the locations where favorable waves are usually found. Since the bottom of the Gulf is made of sand, breaks migrate over time. There are several of them on the island, and unique weather makes different locations better for the day.

When you catch a wave, there is a flow state you enter where there is nothing else that exists outside of that moment, And once that moment is over, you just want to have another moment just like it!

When a spot is chosen, a final text goes out to broadcast the location incase anyone else wants to join us, and then the phones are put away.  We suit up, carry the boards to the water, and start to paddle out. The goal is to paddle out past the breaks, where you sit and watch the waves roll in, waiting for a good one. When it comes, you paddle hard towards the beach, either with your hands or with a paddle, if you are on a paddleboard. If you time everything just right, you catch it and ride it out. Every wave is different. There is no predicting what you will find once you are in it.  If you are off on your timing, you wipe out and have to battle your way back past the waves, called the outside, and do it again. And again. And again. Until everything comes together and you hit the sweet spot.  “When you catch a wave, there is a flow state you enter where there is nothing else that exists outside of that moment,” says Cameron. “And once that moment is over, you just want to have another moment just like it!”

The spirit of the surfing world is one of spontaneity but also focus. You have to constantly pay attention to the fact that you are playing with Mother Nature in a very real way. You may not catch a wave. You could get seriously hurt, or even killed. But if you are smart about what you are doing—and lucky—you get to feel like my friend, Chris Stebly, who has been surfing for thirty-five years. “It makes me feel free!” he says at the end of our day on the water. “It’s heaven!” 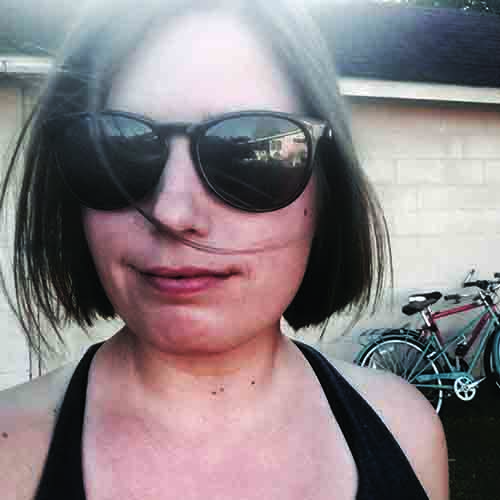 Jessie Zenor is co-owner of the Greenhouse on Porter, a coffee, biscuits, and beer shop in Ocean Springs, Mississippi. Originally from Auburn, Alabama, she moved to Mississippi after earning her degree in architecture and a year after Hurricane Katrina. For seven years, Jessie worked at MSU’s Gulf Coast Community Design Studio, designing low-income housing in response to the storm. While working at MSU, she picked up a few shifts at Sweet’s Lounge. Jessie is an award-winning paddle-boarder and a beginner surfer.