Taj Mahal once referred to Mississippi John Hurt  as the “musical grandfather” he had been looking for throughout his life.  And, though I hate to insert myself into a story involving such illustrious company, I have to agree: I’d been looking for him without even realizing it. This is not my story. This is the story of the man who has become the “musical grandfather” of many, and how his legacy is celebrated annually at the Mississippi John Hurt Homecoming Festival near his hometown of Avalon, Mississippi.

Born in Teoc, Mississippi, John moved to Avalon as a child. Picking up the guitar at the age of ten, his self-taught fingerpicking style would come to inspire many a musician. Starting in 1928 with his first recordings for the Okeh label, and continuing through his “rediscovery” by Tom Hoskins and Dick Spottswood in the early 1960s, he became the breakout star of the Newport Folk Festival and the burgeoning folk revival.

Established in 1999 by Mary Frances Hurt, John’s granddaughter, the Mississippi John Hurt Foundation has worked to sustain this esteemed songster’s legacy, while providing educational and outreach opportunities for the community. The Mississippi John Hurt Festival is one of these forms of outreach. For nearly twenty years, a small (but steadily growing) gathering of fans has been able to participate in an event that in many ways resembles the country dances and fish fry dinners John played during his formative years--an impromptu gathering of musicians and friends. Saturday is dedicated to John Hurt’s blues, and Sunday, naturally, is dedicated to his gospel work. Fans come to play and listen to music, and to peruse the Mississippi John Hurt Museum, John’s renovated shotgun shack filled with memorabilia related to his career. Some fans even bring offerings. Maxwell House coffee cans and railroad spikes are in abundance, in honor of two of John’s more famous tunes, “Coffee Blues” and “Spike Driver’s Blues.”

I had been into electric blues for some time, but something about my first experience with Mississippi John Hurt’s music was significant. It was probably a recording of “Candyman” off of some no-name bargain bin blues compilation disc, but it made my heart leap and my feet dance. I had to learn how to play like him! As it turns out, it takes more than a big heart and a steady thumb. It takes practice. Lots of practice. And, after what I thought was enough dedication, I packed my guitar into my car and headed to my first Mississippi John Hurt Festival. This was 2013. The Festival was a revelation in many ways. So many people were there! And, so many people played so much better than me. So, imagine my surprise when Mary Frances Hurt invited me to play at her grandfather’s graveside. I felt woefully unprepared, both musically and for the transformative experience that would follow. At first, I felt my fingers turn into jelly. Mary Frances remained an inspiring, reassuring presence. Somehow, I pulled together a version of “Make Me A Pallet On Your Floor,” a song I’d rarely played before that experience; and one I’ve never played as well since. I was part of the family now. I was an acolyte.

I’ve been going back every year since.

How many people can tell their own version of this same story? During my yearly visits to the Festival, I’ve met folks from Wales, New Zealand, Belgium and Japan. A family from Texas. Middle-aged ladies from California with ukuleles. A thirteen year old girl with a ukulele. A guitar duo from New York City. A classically trained musician from New York State who took a left turn into the blues, and an apprentice luthier from Alabama.  What was it about Hurt’s music that inspired such a disparate bunch to come such a long way to visit his house and his old stomping grounds? To me, Hurt’s music represents a dichotomy; it sounds old fashioned and different, yet somehow fresh and exhilarating. Something is vitally alive in the bouncing, syncopated rhythms and Hurt’s sweet, honeyed voice.

From its earliest inception, this event in honor of Mississippi John Hurt has been called everything from the “MJH Memorial Blues/Gospel Jamfest” to the “Mississippi John Hurt Music Festival.” In 2018, Mary Frances officially changed its name to “Mississippi John Hurt Homecoming Festival.” No description is more apt. Mary Frances has opined on multiple occasions that “everyone who should be here, is.” Mary Frances regards those who make the pilgrimage to her event as family, connected by a shared love of her grandfather’s music. Fans sit in the shade outside of Mississippi John’s old home and share tunes and stories. They eat barbecue and participate in the open mic, playing originals and covers of Mississippi John Hurt classics. The difficulty of the journey these people made is yet another testament to Hurt’s legacy. The portion of Carroll County Hurt called home is a labyrinth of winding dirt roads, dense forest, and kudzu covered bluffs. The running joke is that you can’t join the Hurt family until you’ve gotten lost out there at least once.

For the last two years, local acoustic bluesman, Ben Wiley Payton, has been the Festival headliner, giving not only his talent but also a great deal of time to the event. Alan Lighty, from Tarrytown, New York, remarked that he’d “never stopped appreciating what a special player [Hurt] truly was.” He also regarded the event itself as something that “will forever be in your heart and soul.” Marc Borms, a Belgian gospel/blues musician who counts himself as being one of Hurt’s biggest fans, said “John taught me to follow your dreams, and so I did.” The festival was “two amazing days that should’ve been two weeks.”

The 2018 Homecoming Festival was particularly significant, as Sunday was the day St. James Church had its rededication ceremony. St. James was the center of the Avalon community before being abandoned and falling into disrepair. Mary Frances and a group of dedicated volunteers worked tirelessly to move the church to her property and renovate it. This was the first church service held inside these walls for nearly two decades. St. James was where Mississippi John Hurt played music and worshipped, and eventually had his funeral when he passed away in 1966. To see so many people from different races and religions come together under one roof echoes a powerful sentiment of Mary’s: through the work of the Foundation, the word “Hurt” can come to mean something other than pain.

Mississippi John Hurt, in his own quiet way, made an immeasurable impact on these people and many more across the globe. Mary Frances refers to music as the “panacea for all the ills of the world.” Music was Mississippi John Hurt’s refuge and his gift to others. Through the Mississippi John Hurt Foundation and the Homecoming Festival, John can--and will--continue to give this gift nearly sixty years after his passing. 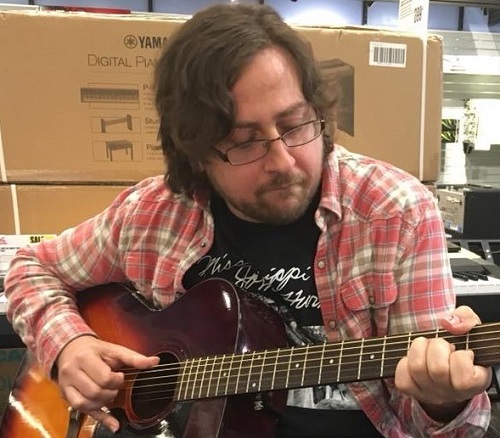 Sam is a graduate of the University of South Carolina Aiken, where he studied Fine Art. He enjoys photography, trains, and blues, in no particular order. He has been a volunteer with the Mississippi John Hurt Foundation since 2013.