All Photography by John Zheng.

Mississippi John Hurt, a world-famous blues musician, was born on March 8, 1892, in Teoc, Mississippi. In a letter to Tom Hoskins, Hurt wrote that when he was two or three months old he moved with his mother and siblings “5 miles north off Teoc” to live in the Avalon and Valley area, 1 which was ten miles away on the eastern edge of the Delta. In 1900, the Avalon and Valley communities together had a population of 3,486. These towns remain today, but Avalon, which once had a railroad depot, a gas station, a post office, and general stores, has dilapidated into a ghost place of abandoned buildings with only two or three dwellings by Mississippi Highway 7 and a small wooden church, Jeremiah MB Church, by Avalon Road. The post office burned down one night some twenty years ago, as far as I can recall.

Among these structures is the John Hurt marker erected by the Mississippi Department of Archives and History (MDAH) on July 7, 2004. It stands by Highway 7 as if to tell a story of long ago. John Hurt was born in 1892, but there is an uncertainty of his birth date. Philip R. Ratcliffe provides some interesting information in his biography, Mississippi John Hurt: His Life, His Times, His Blues: “He was reportedly born on March 8, 1892 (grave marker), March 16, 1892 (Social Security Death Index), May 7, 1893 (some family members), or May 8, 1895 (draft registration).” 2 In addition, two historic markers that commemorate John Hurt adopted 1893 as his birth year: the MDAH marker by Highway 7 and the John Hurt blues marker by the Valley Store, erected by the Mississippi Blues Commission (MBC) on February 25, 2008. The reverse side of the MBC marker provides an interesting line about the specific date of Hurt’s birthday: “According to a family bible, Hurt was born on July 3, 1893.”

Irrespective of his birth date’s uncertainty, Hurt is an irreplaceable icon in the tradition of the blues. Both markers highlight a landscape, a culture, and a history of his birthplace, workplace, personal life, and community. On both sides of the MDAH marker is the same brief biographic note in 53 gilded words:

John S. Hurt (1893-1966) was a pioneer blues and folk guitarist. Self-taught, Hurt rarely left his home at Avalon, where he worked as a farmer. Although he recorded several songs in 1928, including “Avalon Blues” and “Frankie,” he lived in relative obscurity before he was “rediscovered” in the blues revival of the 1960s.

On the front of the MBC marker is a summary of his role as a blues musician in 78 gilded words:

World-renowned master of the acoustic guitar John Hurt, an important figure in the 1960s folk blues revival, spent most of his life doing farm work around Avalon in Carroll County and performing for parties and local gatherings. Hurt (1893-1966) only began to earn a living from music after he left Mississippi in 1963 to play at folk festivals, colleges, and coffeehouses. His first recordings, 78 rpm discs released in 1928-29, are regarded as classics of the blues genre.

While both markers provide somewhat similar information, the latter points out John Hurt’s status as a world-renowned acoustic guitarist and his importance to the blues genre with his first recordings in 1928. It also mentions his performances after his rediscovery in 1963. On the reverse side of the marker there continues a lengthy, three-paragraph narrative alongside captioned images. As the narrative asserts, the characterization of Hurt’s difference from other blues musicians is that “Mississippi John Hurt’s delicate vocals, inventive fingerpicking on guitar, and warm personality endeared him to generations of music fans.”

John Hurt had a smooth, gentle voice. His vocal style is different from other blues musicians because, as the music scholar Ted Gioia points out in his highly praised book, "Delta Blues":

Hurt aimed for precision and refinement, a sense of control and restraint. His delicate stylings were almost the opposite of the Delta tradition…. He sang with a marked sensitivity to enunciation, diction, and volume, mostly eschewing the shouting and hooting, yodeling and growling, testifying and whispering that, in the Delta tradition, sometimes make performances seem less songs than ecstatic monologues. 3

Stylistically, Hurt’s voice was unique through its juxtaposition with his plucking melodies. He was skillful with his fingerpicking, which looked simple but were technically difficult. 4

Geographically, Avalon seemed to be at the junction between the country songs of the hills and the blues of the Mississippi Delta. Hurt learned to play guitar at age nine and began to perform in early 1920s at parties and square dances with Willie Narmour, a local white fiddler and school bus driver at the time. Influenced by an amalgamation of music including blues, folksongs, country songs, rags, and spirituals, Hurt became a musician who welcomed and calibrated different music styles to enrich and develop his own.

When the agent from OKeh Recording Company asked Narmour about other musicians in the area, Narmour recommended Hurt. This was the first discovery of John Hurt in 1928. Invited to travel to Memphis and New York to record his songs, he began to use Mississippi John Hurt as his stage name, which was printed in the OKeh’s advertisement for his songs, “Frankie” and “Nobody’s Dirty Business,” recorded and issued in 1928. His stage name, as well as some of his first OKeh songs such as “Avalon Blues” and “Sliding Delta,” identified his connection to the place where he lived and worked. According to Ratcliffe, Hurt’s songs, which were initially marked as “Old Time Music” on OKeh’s file cards, were “marketed as blues, presumably to boost sales, but were actually not at all, including ‘Candy Man Blues’ and ‘Stack O’Lee Blues.’” 5

During the blues revival of the 1960s, Tom Hoskins, a blues aficionado, set on his journey to rediscover Mississippi John Hurt after he listened to Hurt’s songs “through two tracks on Harry Smith's Anthology of American Folk Music and a bootleg tape that another avid blues collector, Dick Spottswood...” 6  Fortunately, a line of words from “Avalon Blues”—“Avalon my hometown always on my mind”— revealed Hurt’s location and gave a clue for Hoskins to track the musician down in 1963. 7  This rediscovery indicates that Mississippi John Hurt’s first recordings in 1928 did not bring him a financial change during the Great Depression. After his temporary stay in New York City, Hurt decided to go back to Avalon and live the country life that he was used to. His decision to return home also revealed his philosophy of life, which might be reflected in these words from “Avalon Blues”: “New York’s a good town but it’s not for mine.” 8  For thirty-five years after his first recordings, Hurt lived in Valley, doing farm work and other physical jobs, including working at a local gravel pit and making crossties for Illinois Central Railroad. As a little known blues musician, he played at local venues. He frequently visited the Valley Store, which was established in the 1880s, to play blues or buy daily necessities.

In fact, Mississippi John Hurt was a grounded musician who lived a local life, played for local people, and survived with his music through working in local communities. As reminisced by Mary Frances Hurt, one of Hurt’s grandchildren, and Ed Levine, “hearing the music of Mississippi John Hurt feels like sitting on a porch in the old south listening to a warm, caring grandfather tell stories.” 9  Yet, Hurt still possessed the capacity to reemerge as one of the most popular and admirable blues musicians in the 1960s.

The rediscovery, on the other hand, brought Hurt an opportunity to jumpstart his music career after he turned seventy-one years old. Ready to be recognized worldwide, Hurt signed a contract with Music Research Incorporated represented by Tom Hoskins and Richard Spottswood. He traveled to Washington, D.C., to cut albums and have his songs recorded for the Library of Congress. This rediscovery also shows Hoskins’ admiration for Hurt’s unique musical voice. In his letter of February 12, 1982, to Alex Haley, Hoskins wrote that Hurt had “the gentle sounding voice and the unique complex, finger style guitar style, who was known only by the name on a couple of rare, old, battered 78s ‘Mississippi John Hurt.’ Of all those old musicians he had impressed me the most…” 10

After a three-year sojourn in Washington, D.C., Hurt moved back with his wife to Mississippi and settled down in Grenada, which is about 20 miles east of Avalon, but he often went back to visit his blues base. On November 2, 1966, Hurt died of a myocardial infarction in the Grenada hospital, and on November 13, he was buried in the Hurt family gravesite on top of the Valley hills. With the direction given by Charles Spann, who owns the land, I paid a visit to John Hurt’s grave in 2011.

In 1999, Mary Frances Hurt founded the Mississippi John Hurt Foundation, “a non-profit organization devoted primarily to preserving the musical legacy and history of Mississippi John Hurt, while providing musical and educational opportunities to disadvantaged youth.” 11  The foundation established the John Hurt Museum, which was converted from his shack house and now holds an annual John Hurt Music Festival.

While it is doubtless that John Hurt, as a musician with a unique style, has influenced the blues, to me he has served as a resource for my creative writing. In 2011, I wrote an “Avalon Blues” haiku and published it in Modern Haiku. In 2018, I wrote “Mississippi John Hurt,” which consists of two tanka prose poems, “Relocation” and “Memento,” and published it in Haibun Today. 12  Here’s “Memento”:

Mississippi John Hurt used to cut crossties with his axe for the railroad back in Avalon. That axe had been his old friend. Without it beside him any longer, his new life in the crime-ridden inner city of D.C. became filled with anxiety.

he looks out at the street

When someone shipped the axe to him, John treated it as a reminder of his past experience in Mississippi. With the axe in his hands, he felt a sense of fulfillment even though he could not regain the energy to split logs for firewood.

While John Hurt’s life has attracted me to present him in a poetic way, his home base has attracted me to go many times to take pictures. I feel that photographing this place is like communicating with history and culture, giving me many moments to see the landscape through the lens. These trips have resulted in this photo essay, which I hope offers a glimpse into the two locations related to Mississippi John Hurt’s music and personal history. These include abandoned buildings in Avalon and Valley where he once lived and worked, the surrounding fields and church in mist, two historic markers, a vernacular museum converted from his house, and his gravesite tucked away on a shaded hilltop—all of which appear historic as Avalon and Valley refuse to fade in the passage of time. 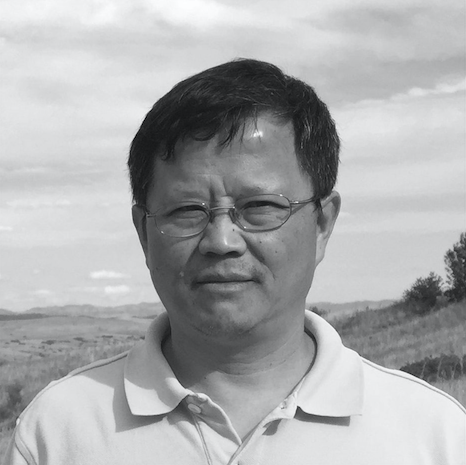 John Zheng resides in Greenwood, Mississippi. He has published photo essays on Robert Johnson, Emmett Till, The Lower Mississippi River, rural churches, African American hospitals and clinics in the Delta, and a few others on Delta shacks, ruins, and abandonments. Several of his photos were used for book and magazine covers. He also publishes photoku (photos accompanied with haiku).