Palpable there was the confluence of history, music, and cultural preservation that make Foxfire so remarkable.

Foxfire Ranch lies in Waterford, Mississippi, an unincorporated settlement in Marshall County between Holly Springs and Oxford, on land that has been in the Hollowell family for over a century. Its current caretakers, Bill and Annie Hollowell, have spent their post-retirement years carving out a home and living out of tough hill country. Their work has transformed the property into a premiere destination for a variety of special events. Foxfire's success is testament to the Hollowells' commitment to family and continuity and their dedication to laidback Southern hospitality.

I first interviewed the Hollowells' daughter Annette in late August 2020. We had long lived in the same city and knew the same people; yet we had never met until then. She was in transition at the time--on the verge of a move from New Orleans to Foxfire Ranch. It was hard for her to elucidate her feelings about her home; she encouraged me to witness it for myself. In September of that year, I took her up on the offer. Even before I stepped foot on the property, it was already shifting me. I am a rusher, a type A get it done-r, but almost immediately, I knew that wouldn't fly on this trip.

I sped in through Oxford, but as soon as Highway 7 narrowed at the outskirts of town, I was forced to slow down. Accustomed to the flat, orderly layout of the Delta, Mississippi felt wilder to me back in these parts. The trees were darker and taller; the roads curved more steeply. Not knowing my way and abandoned by my phone's navigation, I had to pull over to check the written directions. I was on the right route, but the 17 miles seemed like twice that. I would continue to feel lost until suddenly I was at my destination. My irritation turned to awe as I took in the entirety of the place: horses on gentle hills, the cabins in the distance, and the red clay earth, which is locally used as medicine in poultices and internally for digestive issues. Nestled among the trees were sun-bleached wooden pews that reminded me of the country churches whose walls vibrate with hymns. Already, I felt sanctuary.

When I asked Bill what Foxfire offered, he responded: "Everything the other venues don't offer." According to the website, the ranch boasts a 5,000 square-foot open-air pavilion, an indoor banquet hall, multiple stages, 2 private cabins (with two others under construction), outdoor showers, and a full-service catering kitchen. It's a popular venue for weddings, family gatherings, camping, and live music events. In addition, there are trails for horses, hiking, and ATVs.

Mississippi felt wilder to me back in these parts. The trees were darker and taller; the roads curved more steeply.

Since its inception, Firefox  Ranch has hosted a star-studded lineup of musicians including Bobby Rush, Terry "Harmonica" Bean, Robert Belfour, Justin Moore, Willie Clayton, Lightnin' Malcolm, and Cedric Burnside. Both Lightnin’ Malcolm and Cedric Burnside were instrumental in cultivating the music at Foxfire. Now, every other week, there is a Sunday evening concert that not only entertains visitors but also underscores Foxfire's role as a hot spot for the performance and preservation of Hill Country Blues. According to the Mississippi Blues Commission, musicians in the greater Holly Springs area developed the “hill country” blues style, which is characterized by few chord changes, unconventional song structures, and an emphasis on the "groove" or a “steady, driving rhythm.” This differs from the earlier “Delta” blues, which features slide guitar and harmonica. Hill Country Blues was popularized by David “Junior” Kimbrough and R.L. Burnside (grandfather to Cedric). The Hollowells didn't envision the extent of the music, it just seemed to come naturally, perhaps because Marshall County's residents had a history of participating in "porch" music. With Foxfire's Sunday "services," which harken back to the era of the cafe (juke joint), Hill Country Blues artists are granted a regular stage and a paying gig.

On the Sunday of my visit, I got a chance to have a more in-depth conversation with Mr. Hollowell about the ranch. He and his lovely wife have known each other since they were kids and have been married for over 40 years. He comes across firm and even stern perhaps, but he is also soft spoken; while Mrs. Annie is vivacious. During my visit, both were constantly on the move, and I could see how the balance of their personalities could manifest Foxfire's cool energy. While Annie cooked breakfast and prepped dinner for that evening's show, Annette, her two little girls, my sister, and I sat under the pavilion and listened to Bill's life story unfold. In many ways, what he told us was a love story to the land.

His father, Albert, was born in 1892; he used his earnings from his job at the sawmill to purchase 80 acres in 1918. Bill, who was the fourth of six children, drew his first breaths on this place; his father was in his 60s at the time. One of Bill's earliest memories is falling asleep in a pile of cotton his family had grown. Besides farming, the Hollowells raised livestock and sold lumber. Bill's older brothers would hunt at night, bringing back tales of strange, ghostly lights that hung in the darkness. This light, the foxfire that lends its name to the Hollowell's ranch, refers to bioluminescent fungi present in decaying wood.

Albert died when Bill was only nine, and his mother later remarried, moving the family into Holly Springs. Time passed and times changed; many of his siblings migrated North in search of safer, more prosperous lives. At seventeen, Bill himself joined the Army. He did a tour in Vietnam, got married to Annie, earned a college degree, and reenlisted as an officer. For over 20 years, military life would take the family around the world, including stints in Saudi Arabia and Germany. Yet Bill's heart and aspirations remained home. Gradually, he bought his siblings' shares of the land, but his duties meant it would lie dormant for 40 years.

Bill saw it as a labor of love. When I asked him what Foxfire meant to him, he said, "It's everything I want to pour my energy and efforts in for future generations. It's investing for the long term. It's bigger than me, something to leave behind."

After he retired, he settled into a position in law enforcement at the University of Mississippi. Farm life and handling animals and livestock was in his blood, so he decided to create a place where he could do those things. The job certainly wasn't for the faint of heart: the grounds, reclaimed by nature, were covered by thick patches of pine and oak, tangles of wild grapes and blackberries, plus ditches, erosion, and blankets of kudzu without much flat or suitable area for building. Cultivating it into what it is now took planning, clearing, bulldozing, respect for nature, and faith in the process. Out of the work came the work: those seeking event spaces were naturally attracted to the Ranch.

I asked the Hollowells if there was a blues song that encapsulated their feelings about their home. Annette mentioned Lightnin' Malcolm's "Foxfire Ranch," an electric funky-blues-rock instrumental that feels simultaneously like now and yesterday.

"Every time I hear it," she said, "I think of my parents working--black, shining, sweating, working."

Bill saw it as a labor of love. When I asked him what Foxfire meant to him, he said, "It's everything I want to pour my energy and efforts in for future generations. It's investing for the long term. It's bigger than me, something to leave behind." He further iterated his responsibility as steward of the land: "It's not something for me to fix up and sell and go retire to Florida. It's my part of history." He hopes his children and grandchildren share the sentiment.

Bill’s  work doesn't end with family. He is a member of the Holly Springs Cowboys, a predominately black group of cowboys who mentor young people. As part of the program, they bring boys from nearby Memphis out to a friend's livestock farm and illustrate lessons of life through farm work--lessons of cooperation of common sense. For instance, they teach respect for animals and persistence; you can't intimidate a 1200 pound animal to get it to do what you want, nor can you give up every time a lesson fails--advice we all could use.

At around this time in the interview, Annie called us to breakfast--a hearty and delicious Southern spread to fortify us for the day ahead. Bill disappeared, off to one or another of his chores. Only the younger generation remained sitting around: we were having a collective moment, smiling idly out at the beautiful day.

"We do that sometimes, here," said Annette. "We just chill."

Later, my sister and I enjoyed the exhilarating open air showers and wandered the grounds. We lounged on the pews, took a small hike, and just sprawled on the floor of our cabin with the doors wide open to nature; it was communion in its purest sense. The enormity of Albert Hollowell's achievement settled upon me then. The fact that he was able to purchase, maintain, and pass on this land during the height of lynchings and Jim Crow in some of the darkest days of American history is incredible. In the manifestation of his dreams and the dreams of his progeny, all things seemed possible for any of us.

Bill's older brothers would hunt at night, bringing back tales of strange, ghostly lights that hung in the darkness. This light, the foxfire that lends its name to the Hollowell's ranch, refers to bioluminescent fungi present in decaying wood.

Soon the band was gearing up, and Annie had the pavilion smelling like heaven with her cooking. On the menu were greens, dressing, chicken, fish, and all sorts of sides and desserts. The crowd started trickling in, masked and socially distanced, but present. Most immediately went to place their orders at the kitchen window; there was rapture when people ate Mrs. Annie's food, that and plenty of smiles. The night's entertainment was Garry Burnside and his band. The lead singer, Beverly Davis, was beautiful in black bell bottoms and a floral chiffon shirt. She kicked the concert off with "Proud Mary," and we all came to our feet to dance. As the blues played, the crowd danced and ate and danced and ate and laughed and drank homemade wine. All the while, Annette's little girls swerved through the crowd on roller skates, a charmed life.

During the course of the concert, Hill Country Blues legend, Kenny Brown, joined the jam session. Someone's little girl on a pink guitar mounted the stage to play along to Lynyrd Skynyrd's "Simple Man." At some point, the lights of the pavilion came on, resembling a constellation beneath the bright, full moon. As the party continued to rock, we were able to let go, to disconnect from the pandemic, from politics, from social media. Palpable there was the confluence of history, music, and cultural preservation that make Foxfire so remarkable. Around nine, the crowd began to dwindle; Annette walked around handing out chunks of a huge watermelon that had chilled in the refrigerator all day.

"We love our people," she said.

Her words reminded me of what Mr. Hollowell mentioned he would like people most to know about Foxfire Ranch:

"We're family owned and operated and open to the public, and we love our visitors," he said. "Come share in the atmosphere." 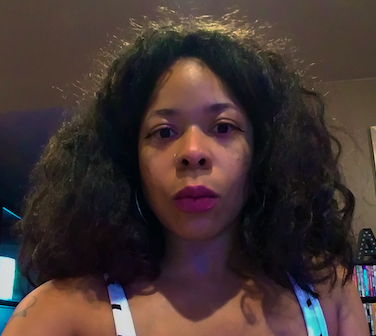