There has been a long history within Mississippi blues of artists working with younger white musicians and promoters. During its heyday as a blues label in the 1990s and early 2000s, Oxford’s Fat Possum Records employed a number of young people who accompanied their elderly artists (including R.L. Burnside, T-Model Ford and others) on the road. In this article, Craig Pickering, a Laurel native, relates stories of his time working as a tour manager (and sometimes drummer) for the label during the early 2000s.

There has been a long tradition within Mississippi blues of younger white musicians working with older African-American performers. With roots are in the 1960s blues revival, when many young white musicians came to Mississippi searching for (and some finding) the earliest blues recording stars, the practice has continued as subsequent generations of white music fans “discover” the blues and look for ways to interact with the musicians.

Craig Pickering was not the typical “blues nut” on the hunt for older musicians, but he got to travel and perform with several Mississippi bluesman, thanks to the Oxford-based record label, Fat Possum Records. Known around the deep south as a drummer for several Alabama rock bands, including The Dexateens, Silver Lions 20/20 and The Sweet Dog Experience, Pickering (also known by his nickname “Sweet Dog”) spent from 2000 to 2005 working as a tour manager and sometimes drummer for a number of the musicians who recorded for Fat Possum.

Pickering is a native of Laurel, Mississippi, but moved to Alabama when he was ten years old. A self-admitted “late starter” as a musician, he began playing drums when he was in his early 20s while attending the University of Alabama. He co-founded The Dexateens, a roots-influenced rock and punk group, in Tuscaloosa in 1998. The band often traveled to Mississippi to share bills with The Neckbones, an Oxford-based group who were one of first rock bands to record for Fat Possum.

The Dexateens liked the sound of The Neckbones’ albums, which were recorded by Fat Possum producer Bruce Watson.  They booked a recording session with Watson at his Water Valley studio in the spring of 2000. While getting set up for the session, Watson asked each of the band members what they did for a living. Pickering believes his response helped plant an idea that led to him later being hired at Watson’s record label.

“At that time I was a student at the University [of Alabama] and I had a part-time job driving blind piano tuners,” Pickering recalled. “That must have triggered a thought in Bruce’s head. Well, he’s assisting people that need help and he can drive a van.”

Soon after, Pickering was offered a job with Fat Possum, serving as the tour manager for a west coast tour by hill country bluesman R.L. Burnside, the label’s most well-known artist at the time. Pickering jumped at the chance, quitting school and eventually moving to Oxford. Watson and Amos Harvey, one of the label’s veteran tour managers, taught him the unique art of managing the older musicians. Pickering spent the next five years out on the road with different Fat Possum artists.

While the drummer had gotten a taste of the rock and roll touring world through his own band, Pickering soon found that life on the road with older Mississippi blues musicians like Burnside, T-Model Ford, and Paul “Wine” Jones was different.

“It’s very unique because you’re dealing with individuals instead of a full band,” he recalls. “They’re older guys so when the show was over, they wanted to go back to the room. They didn’t do late night partying and stuff.”

“Too Many Riffles in the Beat:” Traveling with T-Model Ford

Pickering started out working with Burnside, but ended up spending a lot of time on the road with legendary Greenville-based bluesman T-Model Ford. Although he was in his early 80s when Pickering was working with him, Ford was a competitive performer. When he was working Fat Possum’s “Juke Joint Caravan” tours that featured multiple artists, Pickering recalls Ford taking on the other musicians about who was the best performer.

“T-Model always sat in the front [of the van]. He was the elder. He’d turn around, look at the other guys and go, ‘I took the show last night! Y’all wasn’t hitting on nothing!’ They would fire back. Paul [“Wine” Jones] would go, ‘Oh, you’re playing those same old songs.’ And of course T-Model would accuse Paul of playing his songs. ‘Well, you’re playing one of my records!’ That would happen a lot.”

One of Pickering’s many jobs on the road was making sure there was food for the musicians that they would want to eat. Finding food for them while touring in Europe was especially challenging. Pickering remembered a promoter for a Norwegian blues festival who angered T-Model Ford with a welcome “meal.”

“He comes around the corner with a tub of ice with a big raw fish laid right on top of it. And a bottle of wine jammed in the tub of ice. And he said, ‘Oh, we’re so excited to see you. Welcome to Norway!’ T-Model looks this guy square in the face and says, ‘You can carry that back!’ [laughs] And the guy doesn’t understand. So I said, ‘Oh, we just flew in, our stomachs are a little turned around. Can we get that to go? We’ll take it to the room.’ So once we got it later, we pitched it.”

During his time with Fat Possum, many of the touring musicians were only backed up by a drummer rather than a full band. At one point, T-Model Ford’s drummer Spam (a nickname due to his love of the canned meat) wasn’t able to make a tour and Pickering was drafted to fill in for him. Serving as the drummer simplified the touring arrangement, but it brought about other problems for Pickering.

“Playing drums [with the artists] was by default,” explains Pickering. “It was something I never pushed for . . . it was hard to do because you’d catch a lot of flak from the blues purists. . . I’d always tell the stage people to keep the lights off me because it’s not about me.”

The tour manager turned back-up musician quickly found out that playing behind T-Model and the other blues musicians was very different from his time in rock bands. The older musicians had very definite ideas about the rhythm, which came up on one of Pickering’s first shows playing with Ford.

“Third song into the set, I got my pride handed right back to me. He stops right in the middle of a song in front of six, seven hundred people. . .the mic is still hot, he looks at me and goes, ‘Dog, you ain’t beating right!’ Oh, man. I lost five pounds right there on the drum stool.

I signaled [the sound engineer] to play the house music. It’s getting intense. A lot of times the crowd loved it when the blues artist and their drummer would go at each other like that. I wasn’t going to try to dispute T-Model. He’s ultimately the artist.

So I come out from behind the drums, like a catcher does to a pitcher, and go up to the mound. I squat down next to him. The first thing I do is I take the mic and push it away from his mouth. [laughs]. . I said, ‘James, what’s going on?’ He said, ‘Dog, you’re putting too many riffles in the beat!’”

Playing for Paul “Wine” Jones and Carrying the Lessons Forward

Pickering was able to convince Ford to finish the show, but Pickering quickly learned to play as simply as possible when backing the bluesman. Eventually, the drummer switched over from Ford to tour managing and playing with Belzoni bluesman Paul “Wine” Jones. The guitarist allowed Pickering more freedom behind the drums. They initially played together as a duo, but Pickering later brought in Matt Patton, a bandmate from The Dexateens, to play bass. Jones had a spontaneous approach while playing that the younger musicians had to learn quickly.

“There was no set list with him,” Pickering remembers. “He didn’t even call them out. When the song was over, he’d just kick in to whatever he wanted [to play next]. You’d have to be ready.”
Pickering and Patton played with Jones until the guitarist’s death from cancer in October 2005. After five years on the road with Fat Possum, Pickering was ready for a change. He continued to work as a tour manager, but he switched from blues to working with rock acts. He also went back to playing with rock bands, but incorporated the approach he had learned from his time on the road with Fat Possum artists.

“When I went back to play rock and roll drums, it made me a lot better because it really teaches you how to listen,” he explains. “You’re there not to inflict your stuff on them. You listen and do what you can to support that song.”

Pickering continues to play music around his adopted home of Tuscaloosa. His annual birthday party each March draws musician friends to the town from throughout the southeast. There is not much documentation of his years working with Fat Possum, but Pickering continues to regale his friends with the stories and lessons he learned on the road from a (now) almost-passed generation of Mississippi bluesmen.

Flanagan, Ben. “Drummer Craig 'Sweet Dog' Pickering gets no 'mean looks' in SDX (Q&A).” Al.com. 26 July 2011.
An interview with Pickering about his recent work as a drummer.

Scott, A.O.  “Ode to the Old Schools of Hip-hop and the Blues.” New York Times. 12 November 2004.
A review of YOU SEE ME LAUGHIN’, the documentary film focusing on Fat Possum Records. 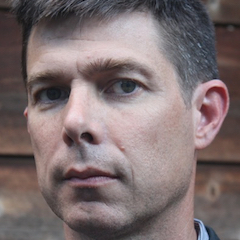 Larry Morrisey is the Deputy Director for the Mississippi Arts Commission in Jackson. He also serves as one of the hosts for the “Mississippi Arts Hour,” the agency’s arts interview program on Mississippi Public Broadcasting. He previously served as MAC’s Folk Arts Director from 1998 through 2008.