Deep in the heart of the Delta, just inside the city limits of Mound Bayou, a couple of unassuming brown wooden buildings draw thousands of visitors each year.  These buildings house the studio and the showroom of Peter’s Pottery. The business, created by the Woods brothers more than 20 years ago, has brought the family both artistic and financial success. The pottery - both practical and decorative - has become a popular symbol of the Delta.

The Woods family creates functional and beautifully designed custom pieces made from the rich Mississippi mud, mostly clay from Louisville and Columbus.

Perseverance and pride are two words that describe Peter Woods.  When this Mound Bayou native could not get a loan from the bank for his family’s business idea, he did not give up. Instead, Woods sold his home and maxed out his credit cards to come up with the equity to start Peter’s Pottery with three of his brothers. Today, this family-centered business sells their Mississippi mud pottery in 25 stores and ships all over the world. Perseverance and hard work, along with talent, made that happen.

Pride, on the other hand, shows up every day through the respect and dignity this family shows for their roots, their parents, and the town that raised them. Their father and mother, Sandy Sr. and Ruthie, were sharecroppers who raised their children in the church in the Freedman’s town of Mound Bayou.  Both the values of their faith and this special town influenced the Woods children. Now Peter and his family hope to help revitalize this historic community with their very successful venture.

“When we started the business, the family all came together and took care of each other until we were financially sound. We covered for each other,” Peter said. “That is the way we were raised.”

Peter’s Pottery is still a family business -  all but four of its 19 employees are Woods family members, and they work together as a team. Only two of the four Woods brothers are alive today. Along with their sister, Brenda, they are committing to training a new generation of Woods potters.

“It’s a family business and we are blessed to work together,” said Peter. “We are each creative in our own way and the pieces are a collective effort. We might have disagreements, but we don’t let that interfere with what needs to be done. This is a collaborative effort and we all have different duties and wear different hats.”

Peter and his older brothers, Joseph, Arthur, and Sandy, all worked for McCarty’s Pottery in nearby Merigold for many years before taking “a leap of faith” to start their own pottery business. McCarty’s Pottery, founded in 1948 in the tiny Delta town of Merigold, was the artistic dream of a local white married couple, Lee and Pup McCarty, who initially set up shop in a relative’s mule barn. They hired the Woods brothers and other local workers to help create the McCarty pottery that has received worldwide acclaim. Peter said he considers the McCartys along with his deceased older brother, Joseph, to be mentors.

“If Mound Bayou is the ‘Jewel of the Delta,’ then Peter's Pottery should be understood as a ‘Jewel of the Jewel’ for its artistic creations and for its economic contributions,” Herts added.

In 1984, Peter Woods started at Delta State University (DSU) after working five years for McCarty’s. At DSU, he majored in accounting and minored in art, receiving his bachelor’s degree in 1989. Woods was named Outstanding Alumnus of the Year and was inducted into the Delta State Hall of Fame in 2018.

After graduation, Woods continued to work at McCarty’s until 1998 when Peter and his brothers decided to combine his business knowledge with the family’s artistic talents by opening a studio of their own. Peter and his family decided to name the business "Peter's Pottery" because Peter was known among his previous customers.

Woods first tried to get a direct loan from a local lender and also started the paperwork for a Small Business Administration (SBA) loan, which is funded through the bank. Both financing avenues proved fruitless.

“We took that leap [selling Peter’s house] because the bank wouldn’t take a chance on an artist and the SBA process had too much red tape,” said Woods. “We prayed about this.”

After liquidating all of his assets, the young Woods and his brothers had $200,000 to get what they needed to start the pottery studio. With his brothers, using what Peter calls their “sweat equity,” they built the building just outside Mound Bayou on four acres of land owned by their brother Joseph. After selling his home, Woods moved back in with his mother and later built his own home next to the family business. His father, Sandy Sr., had passed away in 1996, never seeing his family’s success.

All their hard work paid off when the Woods family had their grand opening at the Talk of the Town store in Batesville on November 15, 1998. People lined up to see their pottery. “From that day forward, we’ve been blessed,” said Woods. Peter’s Pottery sells about 8,000 pieces each year in their showroom, in stores all over Mississippi and neighboring states, and through mail orders.

“We can’t keep up with the demand,” Peter said.

The Woods family creates functional and beautifully designed custom pieces made from the rich Mississippi mud, mostly clay from Louisville and Columbus. They create muted color glazes that they call “dogwood brown,” “dirty jade,” “bayou blue” and “cotton white.” The gentle lines and curves in all of the family’s pieces show dedication to beauty and the art of pottery. The earthy vases, bowls, dinnerware, pitchers, platters, and realistic animal figurines are designed for daily use.

Each year, the studio releases a new ceramic keepsake. Peter said that these keepsakes have become a signature piece of the studio. Rabbit keepsakes are named after each brother. One rabbit is named after the Woods brothers’ sister who died of breast cancer, and two others are named for their nephews who have worked at the business from the start. Many Missisissippians collect these unique rabbits.

In a world of clay that has been dominated by white artists, Woods also mentors other up and coming young Black ceramicists.

Peter Woods, who has now been working as a potter for 41 years, hopes to pass these artistic and business skills on to the next generation of Black ceramicists. He and Sandy are now training his nephews, Jervis and Arthur Jr., to create their signature pottery. In a world of clay that has been dominated by white artists, Woods also mentors other up and coming young Black ceramicists. He is working with a young man in nearby Monticello right now.

“I want to help someone else like I was helped,” said Woods.

Woods has done much to give back to his community. He serves as vice president of the board of Bolivar County Medical Center, and he is president of the board of Saint Gabriel Mercy Center. He also serves in the Bolivar County Chamber of Commerce as well as the Cleveland Tourism Commission, and he is active in his church and at his alma mater, Delta State University.

The city of Mound Bayou is a big part of the identity of Peter’s Pottery. The siblings all grew up and were educated in Mound Bayou schools.

“The historic Black town of Mound Bayou is known as the ‘Jewel of the Delta’ for its history of African American resourcefulness, ingenuity, and pride of place,” said Dr. Rolando Herts, Director of The Delta Center for Culture and Learning and Executive Director of the Mississippi Delta National Heritage Area at Delta State University.  Dr. Herts continues, “Peter's Pottery represents the continuation of this legacy, preserved as a collection of Delta-inspired treasures crafted by the hands of Mound Bayou's own.”

“If Mound Bayou is the ‘Jewel of the Delta,’ then Peter's Pottery should be understood as a ‘Jewel of the Jewel’ for its artistic creations and for its economic contributions,” Herts added. “Peter's Pottery has attracted pottery fans from across the country which stimulates tourism and visitor expenditure in our region. Indeed, tourism and local government leaders nominated Peter's Pottery to be included among the Mississippi Delta National Heritage Area's Top 40 Places to Visit in the Mississippi Delta.”

“We wanted to put Mound Bayou back on the map,” Woods said.

Current Mound Bayou Mayor Eulah Peterson said, “Peter’s Pottery helps Mound Bayou economically and through public relations because they are known worldwide.” Peterson, who went to high school with the oldest Woods brother, Joseph, said, “They are a very positive family and all work well together. They are also very community orientated.”

At the Woods’ request, Mound Bayou moved the city limits to include Peter’s Pottery so that the city could get the sales tax revenue. “We wanted to put Mound Bayou back on the map,” Woods said.

The workshop and showroom and Peter’s home are located on an appropriately named street, Fortune Street. The location has certainly brought fortune to this special family. The business logo has a cross incorporated into the letter P, signifying their faithfulness.

“You never know what God has planned,” said Woods. “If you keep God in all you do, you’ll be successful.”

Peter Woods and his family certainly saw fortune and faith combine to create a successful business that continues the family’s artistic tradition in the Jewel of the Delta. 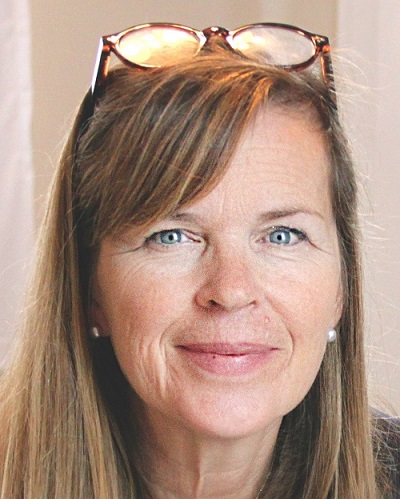 Harriet Riley is a free-lance writer focusing on creative nonfiction. She publishes primarily nonfiction pieces in magazines and on-line publications. She has just moved to New Orleans after living in Houston, Texas for 11 years. There she taught creative writing in a variety of settings with Writers in the Schools. Before moving to Houston, Harriet taught undergraduate writing classes at the University of West Florida in Pensacola. She has also worked as a non-profit director, hospital marketing director, and newspaper reporter. She has her MA in print journalism from the University of Texas at Austin and her BA in English and journalism from the University of Mississippi. She lived the first 18 years of her life in Meridian, Mississippi.