Around the same time I began songwriting, I was also competing in local 5K running races. One thing I loved about races was that the results were objective. There was a start line, a finish line, and everyone ran the same course. The person with the fastest time across the finish line won. Everyone knew what to expect.  Not so in songwriting.  While there are some objective criteria, whether a song is "good" is largely a matter of opinion.

With no start line, no finish line, no course, and no clock, what does it mean to "win" in songwriting? Paradoxically, a voice disorder played a part in the evolution of my songwriting.

Mary Bifaro, Support Services Director for the National Spasmodic Dysphonia Association (NSDA) and I are in touch a lot, but due to a rare voice disorder, we are both hard to understand, making talking on the phone especially difficult. Our voices are described as breathy or strangled--either way it's exhausting. Social media, email, and Zoom are treasures to us because they take “voice” out of communication altogether, or they allow for visual cues that are so crucial to communicating with an unreliable voice.

Who hasn't, at some point, for whatever reason, felt that they were not, or could not be heard, or that they were hesitant to speak up? Finding one person who understands is enough.
But finding a whole group is life-changing.

Mary had hit me with a tall order. "Wendy, can you write a song for the NSDA? We want an anthem." An anthem! As a person dealing with a voice disorder daily, and as a volunteer North Mississippi/Memphis support leader for the organization, I wanted to write that anthem.

I also doubted myself. Could I do it? Would it be good? What would people think?

Ever positive, Mary knew and loved my slide guitar playing. In fact, she and NSDA executive director, Ms. Kim Kuman, had made it possible for me to play my instrumental slide guitar act at the opening night welcome party for the 2017 NSDA conference. Mary and I renewed our connection in April 2021 at a virtual NSDA leadership workshop. She had noticed and commented encouragingly on my song-oriented social media posts.

"I just listened and I can't stop crying," Mary emailed me from North Carolina, a few minutes after the live stream aired this May. It was thrilling.

About one year before the start of the pandemic, I had begun grappling with songwriting. I became part of a Tupelo songwriting group, trekked to open mics in Oxford, paid attention to other songwriters, got feedback on my ideas and lyrics, and attended shows in Tupelo, Water Valley, Waterford, Taylor, Oxford, and Clarksdale. I took part in workshops on songwriting and subscribed to songwriting magazines. Now and then, brainstorming and co-writing with local musicians produced songs. The process was delightful, if sporadic. Not being a singer, what a joy it was when various collaborators' vocals brought life to co-written songs. I read books and watched videos on songwriting, studied songs and lyrics, did daily writing exercises such as 10 minute practices on calling up sensations. I had been accepted to, and registered for, a songwriters retreat out West, which later became impossible due to the pandemic.

Before the spread of COVID-19, I had submitted songs to contests and to anonymous reviewers in Nashville. I won no contests. The comments that came back on various early songs from anonymous reviewers were, "You'll just have to dig deeper," "It is an average melody as far as melodies go. Nothing groundbreaking here," and on another: "I just don't understand the point of the song...Why bring it up?"

While I won none of these contests, I learned that songwriting, like everything, takes practice. However, such remarks did not show HOW to improve. In one way, though, the vague commentary was useful. It prodded the realization that, for me, feedback based on personal connections and relationships, rather than anonymous commentary, is best for learning.

Early in the pandemic, I had started following Memphis-born, award winning songwriter and performer Grace Askew on Instagram. She writes and live streams a song every day. To get fresh ideas, she often challenges her followers to submit a single word suggested by a photo she posts. She then selects and uses 10 of the words in the song she writes for that day. For me, participating in her exercise built up my skills in coming up with descriptive words, and it was gratifying when she used any of my word suggestions.

The stars aligned when Grace began to offer one-on-one artist consultations to help other songwriters and to support herself while the pandemic kept her from touring.

In February of 2021, Grace took me on as a songwriting client, and we met twice a month via Zoom. We don’t talk about songwriting in these sessions, instead we write a song. Whether it is "good" or "bad" is not the point. The emphasis is on the PROCESS of writing regularly, improving skills slowly, and letting go of caring about how it will be received.

I Have a Voice

"I Have A Voice," the song that moved Mary Bifaro to tears, was created on May 14, 2021, in a one-hour songwriting session with Grace, using 10 random word prompts to get us started. The words were: Hollow; Famous; Building; Kill; Wish; Finally; Lucky; Attention; Bring. More than half of those appear in the song. The twist for this prompt was that we focused on the song Mary had asked me to write.

In our session, we discussed the exact subject only after Grace revealed the random words. I explained what it was like to live with a voice disorder. As soon as I began to express doubts about our ability to come up with the song, Grace waved off the doubts and said, "Let's do it!" We wrote the lyrics while Grace made up a tune on the spot. A few minutes after we got off of Zoom, she live streamed it as her song of the day. Listen here to the original live-stream: https://fb.watch/5GktFemICS/

In early June, Grace agreed to professionally record "I Have A Voice" for the NSDA. A few weeks later I booked time in Oxford at the studio of my friend and University of Mississippi Professor of Music, Ricky Burkhead. In his studio, I played my slide guitar part while listening to the vocal and guitar tracks Grace had recorded separately. Professor Burkhead then mixed and mastered all tracks for the final product. With licensing complete, the song is now featured on the NSDA main page as we begin our 2021 international fundraising. Listen to the final version here: https://dysphonia.org/

Why It's a Winner

Whether it is "good" or "bad" is not the point. The emphasis is on the PROCESS of writing regularly, improving skills slowly, and letting go of caring about how it will be received.

What thrills me about "I Have A Voice" is not whether it won a contest or if it would win a contest, or even if it is "good," but that it hit the jackpot with the friend who asked for it, and with the community of people who struggle. My husband, who has walked every step of the way on my music and voice journey with me, reacted emotionally to the song as well. And he couldn't believe we had written it in such a short time!

A good part of the reaction was due to the way Grace sang and presented it, her voice full of assertiveness, truth, and emotion.

Who hasn't, at some point, for whatever reason, felt that they were not, or could not be heard, or that they were hesitant to speak up? Finding one person who understands is enough. But finding a whole group is life-changing. In my experience, that was the NSDA.

Post-pandemic, I will continue to write, and if I do enter a future contest, no win could be as sweet as this one. 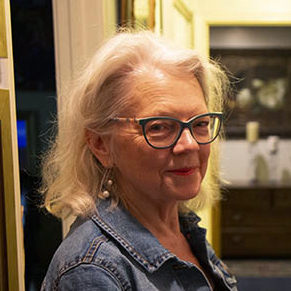 Wendy Jean Garrison “msslideguitar” is a slide guitar player and songwriter in the storied town of Oxford, Mississippi. Her influences come from her chosen home as well as the Mississippi Delta to the west; Tupelo to the east; Hill Country to the north with a touch of Nashville thrown in. Profiled on the Mississippi Arts Commission’s Folklife and Folk Artist Directory, her “otherworldly” sound is recognized and sought-after throughout North Mississippi. Her Ph.D. in biology, and teaching career as a faculty member at the University of Mississippi has deeply influenced her relationship with audiences, and her music’s subject matter.