What happened to all of the negatives and prints--quite possibly forty-years worth or more--that were surely being housed in TC Reese’s Memphis studio prior to his death on January 1, 1989?  And, given that he spent over two decades traveling the Memphis Tri-State area (Tennessee, Mississippi, Arkansas), taking school portraits, why do so few people from the region associate the name TC Reese with photography?  Rather than die a natural death, a part of me wonders if my uncle walked into his darkroom on New Year's Day of 1989, shut the door behind him and, in the process of developing one last reel of film, simply vanished.

My interest in my great uncle didn’t begin in earnest until after I’d learned of his hurried departure from Water Valley, Mississippi. I first heard the tale from my grandfather, Edgar Hawkins, over dinner at my parents’ home. The story centered around the time Granddaddy and Uncle Bud armed themselves with shotguns prior to driving the ninety mile stretch between Memphis, Tennessee, and Water Valley, Mississippi, in order to rescue Uncle TC According to Granddaddy,  they’d received word that TC had suffered a beating at the hands of an unknown number of white assailants for having the reckless audacity to oblige the white women who’d dropped by his photography studio and asked to have their pictures taken.  Not just any pictures, mind you. Pictures of them--in the nude.

A part of me wonders if my uncle walked into his darkroom on New Year's Day of 1989, shut the door behind him and, in the process of developing one last reel of film, simply vanished.

Born in Lafayette, Mississippi, in 1923,  TC Reese (TC’s given name was TC and is recorded as such in both his military and social security records) cemented his place within my extended family via his 1949 marriage to my grandmother’s sister, Verna Ree Ham, aka “Snooks”.  According to my ninety-one-year-old Aunt Snooks, she and Uncle TC met at Davidson High School in Water Valley, Mississippi.  She believes that the segregated high school is where he first honed his photography skills.  Talbert, the youngest of the couple’s four children, claims that his father was fully supporting himself with his photography by age sixteen and photographic evidence does suggest that as far back as the early 1940’s, TC was operating a photography business in Water Valley, Mississippi.  Joyce, the eldest of Aunt Snooks and Uncle TC’s children, thinks her father became even more proficient with a camera during his stint in the Army (1948-1951), and her brother Talbert insists that their father did, in fact, serve as an official military photographer.  In 1951, the same year of Uncle TC’s last army discharge, his photo “Goat Man” won a $50 prize in a Popular Photography magazine photo contest, a monetary amount equivalent to nearly $500 today.

After being run out of Water Valley at some point in the early to mid-1950s, TC Reese resettled in Memphis, Tennessee.  By 1956, according to the Memphis City Directory, my uncle was operating a studio in downtown Memphis at 356 E. Calhoun.  In that same year, photographs bearing his stamp had begun appearing in The Memphis World, a newspaper that served the black community. Over time, TC’s business grew lucrative enough for him to employ assistants, afford the purchase of new cars and, prior to his and my aunt’s divorce in the 1970s, move his family into bigger homes and better neighborhoods.

Truly, it pains me to think that a lifetime of photographs and possibly reel-to reel film of black southerners, captured between 1940 and 1980, and shot from a southern-born black man’s perspective, is forever lost.

Incredibly, I’m not sure anyone knows exactly what happened to the contents of Uncle TC’s studio upon his death.  When asked, TC’s son Talbert explained that on his last visit to his father’s studio, the interior reminded him of a scene from the television series, Hoarders.  Talbert said after searching in vain for home movies he knew his father had recorded, he grabbed a couple of old cameras and left.  He and his sister Joyce suspect that the contents of their father’s studio landed in the dump.  Truly, it pains me to think that a lifetime of photographs and possibly reel-to reel film of black southerners, captured between 1940 and 1980, and shot from a southern-born black man’s perspective, is forever lost.

For years, my uncle’s photography barely registered with me even though, once upon a time, a handful of framed portraits, all taken and developed by TC Reese, graced the walls of my home and collected their share of dust atop a pair of old chest-of drawers and a 1950s tv-stereo console in the North Memphis bungalow I lived in (off and on) with my grandparents throughout my childhood and young adulthood.  My Uncle TC had long been dead before I realized that all of the cherished photographs scattered about my grandparents’ home either bore my uncle’s signature or the “Reese Studio” stamp.  So, like a familiar smiling haint whose blurry image is readily seen but seldom mentioned, my Uncle TC hovered for years, not in the shadows of my life, but right there in plain sight.

I only met him in the flesh once that I can remember.   I was either seven or eight at the time and didn’t even realize he was kin.  All I recall about the encounter was my inability to decipher if the thin, pale, little old man adjusting my poses and peeking at me from behind the camera in the darkened room was black or white.  Our lack of interaction was likely due to my being an Air Force brat who spent a large portion of my childhood living outside of Memphis.

But even after choosing to attend college in Memphis in the early 1980s and settling in with my grandparents, I never came into contact with my Uncle TC.  To be honest, his name wasn’t one routinely mentioned in conversations with relatives, which explains my astonishment years later at the story my grandfather told about him over dinner.  Unlike so many of my other great uncles, TC never showed up at my grandparents’ home to say “Hey” or to go hunting on a Saturday morning with my grandfather.  Having recently spoken with a number of relatives about him, I’m left with the impression that Uncle TC wasn’t much of a homebody and spent more time in his studio, and on the road, than he did with his immediate family.

My Uncle TC hovered for years, not in the shadows of my life, but right there in plain sight.

From what I gather as well,  Uncle TC, who nicknamed himself “Top Cat,” was a bit of a character--playful, personable, and in possession of a wonderful sense of humor.  According to Talbert Reese, his father’s eyes would light up when he talked about his life’s work and passion: photography.  Given my own interest in culture and the arts, not to mention my love of old photographs, I think my uncle and I would have had plenty to discuss and would have had a great time doing so.

While the story my grandfather told around my mother’s dining room table all those years ago has been a constant buzz in the back of my head, I wasn’t compelled to write about my Uncle TC until late in the fall of 2016.   Online late one night,  I decided to Google “TC Reese,” something I’d done to no avail over the past few years.  On this particular search, I was thrilled to discover a mention of a “Reese Studio” in the online article: “Conscientious/Spotlight: Photographs From The Memphis World 1949-1964” which discusses a 2008 exhibit at The Memphis Brooks Museum of Art.  The article also included photographs from the exhibit--one that bore my uncle’s stamp “Reese Studio” and the other his signature “Reese.”

I’d like to think that a large number of “Reese Studio” pics--hundreds, possibly thousands--are still out there somewhere just waiting to be found.

Eager to see what had been written about my uncle and his body of work, I ordered the exhibit’s catalogue (Photographs From The Memphis World: 1949-1964) only to find myself perplexed by what I had discovered. Not a single word about him.  No photos of him.  Not even a mention of his full name.  To my knowledge, none of his family members, including his children, two of whom still reside in Memphis, had any idea that an exhibit featuring TC Reese’s work had even occurred.

I discovered a similar dearth of information on my visit to Water Valley, Mississippi, in the spring of 2017.  I was stunned to find no mention of him, his work, or that of any other African American with Water Valley roots in the town’s nearly forty-year-old library and in a community that has maintained a library of some sort for more than eighty years.  Even more unsettling was my drive down Water Valley’s Martin Street or, more specifically, “The Block,” where my uncle’s photography studio, the businesses owned by his brother-in-law James “Jimmy” Harris and a number of other African Americans, were once located.  While the community’s historic architecture, affordable housing, and small town charm has in recent years spawned a number of revitalization efforts and an influx of young families and entrepreneurs, the 200 block of Martin Street languishes as little more than a ghost town full of weeds, vacant lots, and buildings that look abandoned, if not in dire need of tearing down.

With the help and patience of a host of family members, as well as the kindness of more than a few strangers, I’ve been gathering information, as well as collecting and copying as many TC Reese and “Reese Studio” stamped photographs as I can find.  Deep inside of me lives the unfettered hope that perhaps not all of the photos, negatives, and film left behind in Uncle TC’s Memphis studio landed in the dump.  Maybe some of them were pulled from the trash heap or rescued from destruction by some curious soul or fellow collector.  I’d like to think that a large number of “Reese Studio” pics--hundreds, possibly thousands--are still out there somewhere just waiting to be found. 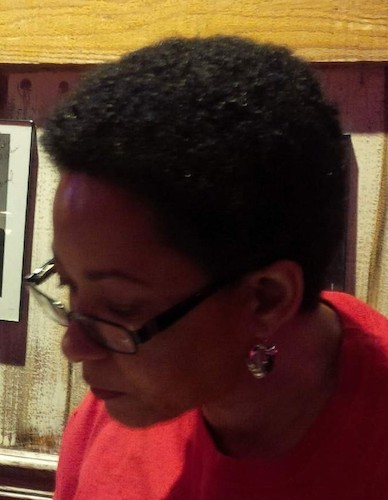 Lori D. Johnson has an M.A. in Urban Anthropology from the University of Memphis. She is the author of two novels, A Natural Woman and After The Dance. Her work has also appeared in a variety of publications, including Upscale Magazine, Memphis Magazine, The Commercial Appeal, The Tri-State Defender and Obsidian II: Black Literature in Review. She lives in Charlotte, NC, but considers Memphis, TN home.